A Brief History of the Russian Revolution 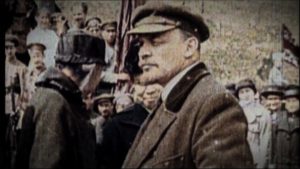 In 1917, Russia went through two revolutions. The first revolution began in February, following Russia’s disastrous participation in the First World War and looming economic collapse. A series of major strikes, demonstrations and mutinies took place in Petrograd against food shortages and soaring inflation. Workers and soldiers formed the Petrograd Soviet, which refused to acknowledge the authority of the Tsar. Unable to face reality, and with a general loss of authority, Tsar Nicholas II abdicated in March and the Provisional Government took over. At this point, the Bolsheviks were still relatively weak and the Provisional Government was dominated by the more moderate Mensheviks and Socialist Revolutionaries.

But this soon changed. In April, Lenin and other Bolsheviks returned from exile in Switzerland. Lenin’s drive and ability to read the situation had a decisive effect. The new Bolshevik policies “peace, bread and land” and “all power to the Soviets” galvanised support amongst workers, peasants and soldiers. Protests against the new government quickly grew as it failed to deal with the economic crisis or bring the war to an end.

After the Bolsheviks agreed to support popular demonstrations in July, the Provisional Government re-asserted control and Lenin was forced into hiding. In August, General Kornilov made an attempt to seize power for himself. The Bolsheviks took the lead in saving Petrograd from Kornilov. The Red Guards, under Trotsky’s direction, organised the defence of the city. Within a few days, Kornilov’s revolt was over. It led to a big increase in support for the Bolsheviks. By September, they had taken control of the Petrograd Soviet.

As divisions grew within the Provisional Government, Lenin realised this was the time to take power in the name of the Soviets. On 24th October, units of the Red Guards seized strategic positions in the city. On the 25th October the Bolsheviks stormed the Winter Palace and arrested the Provisional Government. Lenin proclaimed the victory of the revolution. The new Soviet government embarked on the construction of a socialist society, but encountered many challenges. Germany agreed to peace in the Treaty of Brest-Litovsk (1918), but as soon the First World War ended the Allied powers (USA, Britain, France, Japan and others) invaded Russia from all directions in support of the White armies, who were united by their opposition to the Bolsheviks and wish to continue the war against Germany.

The Russian Civil War led to serious famine and many casualties, and forced the government to adopt ‘War Communism’. By 1921 the White armies had been defeated, and Russia began to rebuild under the ‘New Economic Policy’. In 1922 Russia united with other former territories of the Russian Empire to form the Soviet Union.

The Centenary of the Russian Revolution