Born in Glasgow in 1903 and moved to Seattle (USA) at the age of ten, John Williamson joined the Socialist Labor Party of America in 1918 and played an important role in the struggles of the automobile, steel and electrical workers, and of the unemployed during the Great Depression of the 1930s.

According to the MML Quarterly Bulletin, Williamson was "seeking for the basic causes that made such struggles necessary". In 1921 he decided to join the Communist Party of the United States of America (CPUSA), which managed to survive despite the hostility of the American administration.

After the Second World War, government persecution against the members and supporters of the CPUSA increased steadily and achieved its peak in 1949. That same year John Williamson was convicted under the Smith Act in an attempt by the US Department of Justice to "decapitate" the leadership of the Communist Party USA (for further information, this collection holds the appeals of the Smith Act trials against twelve members of the National Board of the CPUSA, namely Eugene Dennis, John B. Williamson, Jacob Stachel, Robert G. Thompson, Benjamin J. Davis, Jr., Henry Winston, John Gates, Irving Potash, Gilbert Green, Carl Winter and Gus Hall. William Z. Foster was indicted but not tried because of illness).

He spent five years in prison and then deported to the UK upon his release in 1955. During his exile, he started writing his memoir, "Dangerous Scot", which will be eventually published in 1969 by the International Publisher.

He spent the rest of his life in Great Britain and continued to be active in the Communist Party of Great Britain.

In 1964 he was employed as a part-time librarian of the Marx Memorial Library and organizer of its educational activities. He also had his own column in The Morning Star called "View on America", whose cuttings are held in the MML as part of the collection.

Soon after his death, in 1974, his family donated the John Williamson Collection to the Marx Memorial Library. This rich collection of books, pamphlets, journals and periodicals includes American labour and social history, political and trade union history, international affairs and civil liberties.

Today, this collection represents a great source to whoever is interested in the radical movements in the United States. Our Williamson material on our catalgue can be browsed here. 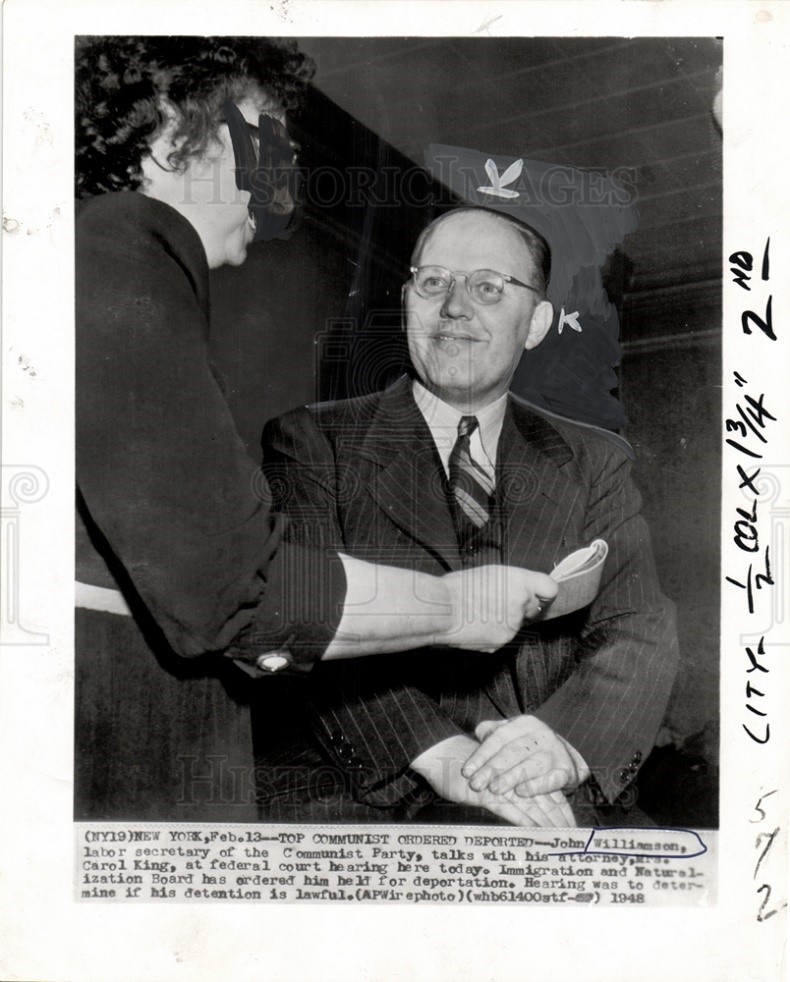