In 1933, the fiftieth anniversary of the death of Karl Marx, a delegate meeting comprising trade unionists, veteran socialists belonging to the Labour Party and Communist Party, and representatives of the Labour Research Department and Martin Lawrence Publishers Ltd., considered setting up a permanent memorial to him. That year also saw the Nazis in Germany burning books. In these circumstances the meeting resolved that the most appropriate memorial would be a Library. Thus the Marx Memorial Library and Workers School was established at 37a Clerkenwell Green that year. Study classes, held in the evenings, became the distinguishing feature of the Workers’ School, which was divided into faculties of science, history and political economy.

In 1934 Viscount Hastings, who had studied under the great Mexican artists Diego Rivera, executed a large fresco style mural on the wall of the first-floor reading room. Titled, 'The Worker of the Future Clearing away the Chaos of Capitalism', it illustrates events and leading thinkers in the history of British Labour. 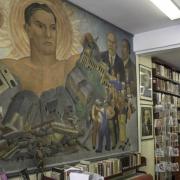 A Library of books, pamphlets, archives and posters grew over the years and was augmented significantly by the donation of the International Brigade Association archive in 1975, the Klugmann Collection in 1977, the Bernal Peace Library in 1994 and the archives of the print unions in 2009. It expanded to occupy the whole building over the years. 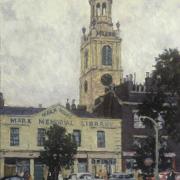 The premises achieved Grade II listed building status after the facade was restored in 1968-9 to the way it had originally looked in 1738. During further refurbishments in 1986, tunnels were discovered underneath the Library. Their origins are obscure but they significantly pre-date the building.

Since its establishment the Marx Memorial Library has been the intellectual home of generations of scholars interested in studying Marx and Marxism. The Library is home to an impressive number and variety of archives and collections including the full run of the Daily Worker and Morning Star, The International Brigade Archive, Bernal Peace Library, Klugmann Collection and an extensive Photograph Library. For over eighty years the Library has continued this work of collecting published and archival material on Marxism, trade unionism, and the working class movement and makes them available through lectures and educational courses. As a registered charity we rely on your support to continue our work as one of the foremost institutions serving the British Labour Movement and working people, in preserving their past and in providing practical education for the future.

Film: Marx on the Wall

When the mural by Jack Hastings at Marx House was rediscovered in 1991 behind the library's bookshelves, a film was made about the artist, his work with Diego Rivera in the United States, and how the mural came to be painted in 1934. It is available courtesy of Peter at Frontline States Ltd. (www.frontlinestates.ltd.uk/jack-hastings) who apologises for its quality because it was recorded from the original TV screening. ‘Marx on the Wall’ is shown with the kind permission of Tariq Ali and Bandung Ltd.